The history of bow hunting

The bow and arrow 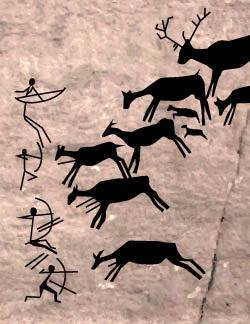 Fred Bear once said. With this he wanted to show that the evolution of modern man is linked to the evolution of the manufacture and use of tools and weapons. First the stone, then the spear or atlatl and finally the bow made it possible to outwit prey quickly and from a safe distance. Thanks to the availability of a more constant source of animal protein and the more complex skills required by our ancestors, our brains grew in size and capacity. The evolution of our speech is also associated with the complex group hunting of larger prey animals in herds. To coordinate this, it was necessary to be able to communicate.

In the Sibudu cave in South Africa, arrowheads were discovered that could be dated between 60,000 and 61,000 years old. Remnants of blood, natural components of glue and bone were even traced. This recent find dates the use of bows and arrows suddenly 20,000 years earlier than previous finds. The first European discoveries in Germany were between 17,000 and 18,000 years ago. The Danish 8,000-year-old Holmegaard bows, found in a peat bog, were "self" bows, they already had the well-known D profile and the slats or limbs were flat. Until the Neolithic Revolution, the bow was the primary weapon next to the spear used for hunting. The use of the bow would be brought to the American continent via Alaska and the first finds that prove this are from 6000-7000 years ago.

In the beginning of the Neolithic revolution the bow got another function and became a weapon of defence or war. Interpersonal violence was often settled with the bow and arrow. Finds of 5000 year old arrowheads around settlement structures in Cornwall (UK) at a possible entrance show that the bow played a major role in such conflicts.

In the Bronze Age, archers on horseback or in chariots were the determining factor of an army, a trend that was seen in Eurasia and later also by the Romans.

In the Middle Ages, no army was conceivable without its archers. The Vikings also used the bow as an offensive weapon. In the proclamation of 1252 by King Henry III, the English vassal was obliged by law to be and remain trained in the use of the longbow. In the Battle of Crézy (1346), according to tradition, 6,000 English archers released 42,000 arrows per minute. The most famous battle in which the bow was central is the Battle of Azincourt (1415). The strongly weakened army under command of Henry V that retreated to Calais was stopped by an army on horseback, formed by French knights and noblemen. Thanks to the strategic choice of the battlefield, which was narrow and muddy, the French army lost its advantage and was decimated by the English longbowmen.

The advent of the musket and the cannon banished the bow from modern warfare and by the 1600s it had disappeared completely and been replaced by the firearms. Although an archer could fire faster, the firearms of the time had greater range and penetration capability than the bows of war.

Modern hunting with bow and arrow

This way of hunting is of course not new.

On all continents except Australia people were and still are hunting with the bow.

The primary reason is for food supply or hunting. With the discovery of gunpowder and the evolution of firearms, the bow gradually lost its function. Around the 1800s, the bow had been almost completely replaced by flintlock weapons. The great revival and return of the bow was largely due to a few passionate pioneers. First of all, there was the book "The Witchery of archery". Written by the Thompson brothers, who took up the bow out of necessity to survive after the American Civil War in 1865. This book became an unexpected success and encouraged many Americans to take the bow in hand again. The second major milestone was in 1911, when an Amerindian stepped out of the wilderness. Named Ishi, he was the last of his tribe, the Jahi. As a kind of living exhibition and poorly armed against contemporary diseases, he was assigned a doctor, Dr Saxton Pope, at the University of California. He soon became fascinated by how Ishi could manufacture bows and arrows and how Ishi could hunt with these very skilfully. Arthur Young joined the duo through several articles in the press.

Together with Ishi, an exchange of knowledge arose about hunting with bow and arrow and about how these could be manufactured with natural materials of the time. Saxton Pope wrote several books about the short time he had spent with Ishi. Ishi himself, with little resistance to western diseases, died 5 years later of tuberculosis.

Pope and Young's books became not only the founding fathers of modern bow hunting but also the emergence of a new kind of hunter or gamekeeper who began to follow a moral and ethical code. Today, Pope & Young is the preeminent organisation around game hunting where maturity of the animal is the determining factor. Also the principle of "fair chase" has its origin in this period. A new way of hunting in which the hunter will hunt in a legal and ethical manner without an unfair advantage over the game.

One of the most famous founding fathers who followed in the footsteps of Pope and Young was Fred Bear (1902-1988). He was for many the figurehead of the American bow hunter. A very talked about and charismatic figure who with his stories and statements appealed to the imagination of a whole generation of hunters with bow and arrow. Another well-known figure who introduced the bow to the general public through the media was Howard Hill (1988-1975). He was called the world's greatest archer, the man who advised Hollywood stars like Errol Flynn and taught archery in the film industry. Known for his trick shots and one of the first hunters with a bow and arrow who went hunting in Africa. The great technical leap forward was due to the invention of the first compound bow by Wilbur Allen (1909-1979) and then Ben Pearson (1898-1971), the first to manufacture and sell bows and arrows on a commercial scale. Thanks to a well thought-out system of different opening times for each hunting weapon in the United States, you can hunt with the bow much longer than with most firearms. This creates a large audience with a demand for innovation and a specialised industry that follows with a large supply.

The Witchery of Archery, by Maurice Thompson (1878)

Of course, trends come over from the USA, and so does hunting with bows and arrows. France was one of the first countries to legally regulate bow hunting in 1995. And many European countries followed.

In the spring of 2013, 4 Flemish hunters started their IBEP training, with the then Walloon Bowhunting Federation, fédération Wallone des Chasseurs à l'Arc (FWCA). Frank Siedentopf, who had received his IBEP a few years earlier, was already helping to organise this training. At the FWCA stand, during the Ghent Hunting Fair, he met Stefaan Rotthier, a young fellow with a lot of hunting experience but also a strong motivation to learn to hunt with a bow. Stefaan could not wait to start his training. There were two other Flemings at the IBEP training of 2013. Luc Krols, an intelligent guy from Antwerp and the experienced Jan Morias(*). It clicked between these 4 and soon plans were made. With Luc's knowledge of the archery circuit and club life, together they looked to start up a Flemish counterpart to the Walloon Archery Federation. Naturally, the first and most important step was to be able to give a Flemish training course ourselves. For this, instructors were needed. Thanks to the support of our Walloon colleagues and the European Bowhunting Federation, our 4 friends were able to complete their IBEP instructor training through Portuguese Master Instructor Carlos Freitas.
The Flemish Bowhunting Association was a fact! Soon there was an expansion with more instructors and together with the FWCA they decided to establish an overall Belgian  organisation, the Belgian Bowhunting Federation. This way both parts of the country joined forces and we could also join the European Bowhunting Federation.